I haven’t done a mini milestones post in a while and there are a few lovely Monkey things that are making me dead proud at the moment so I thought it was time I did. It seems that he has grown up and his development has sped up rapidly just in the last couple of weeks since the arrival of his baby sister. It is incredible and he really is very fun to be around at the moment.

This may seem like a slightly braggy post (Look how amazing my toddler is) but it’s mainly to keep a record of what he can do, when, and if I sound a bit braggy it’s because I am actually pretty amazed by his development, and loving every minute of it.

I wrote a post not too long ago about how Monkey had really got into his singing but believe me, that was the tip of the iceburg. In the last couple of weeks he has really found his voice and is just singing constantly. Sometimes he is making up songs but most of the time he is amazing us by reciting nursery rhymes. It started off with “The wheels on the bus” which was repeated over and over but then he began to expand his repertoire.

One day he brought over the nursery rhymes book, opened it on the “5 little ducks page” and sang the song the whole way through, Another day he started on “twinkle twinkle little star”, then “hickory, dickory, dock” “1,2,3,4,5” and even “Jack & Jill.” It’s just gorgeous. He mumbles and misses out some words but it is so cute to hear him sing. Here is a little video of a bit of the singing we have managed to capture 🙂

I know I bang on a bit about how much Monkey loves numbers but honestly I am just dead impressed with him really. He can now count happily up to 40, which we are just a bit amazed by. He counts anything and everything and really seems to understand counting too, not just parroting back numbers. He loves counting things off on his fingers and he always wants us to draw clocks or just write numbers down for him to recite. It’s just lovely.

His letter learning has come on leaps and bounds too and again just amazed by him. We started playing with the fab letter blanket my Mum made and it has really taken off from there. We’ve also watched some fab videos on YouTube that Monkey loves. It started off because hubby remembered watching some fab number things from Sesame Street when he was a kid and wanted to show Monkey. Monkey loves these and I think they have definitely helped with his numbers, but then we saw some letter videos and watched those too. He adores them and now recognises most letters on sight, reciting back the phrases used in the song “A is for Apple, ah, ah, apple” or “I is for igloo, i i igloo” whenever he sees a letter on a t-shirt or in a book. He is brilliant.

(You can see some of Monkey’s fave videos on YouTube here, here and here)

He has taken it a little further in that one of his books is a hungry caterpillar word book. Since he started talking he loved it, it’s really simple just pictures and words but now when he reads it he includes the first letter sound too. So instead of just saying girl, he says “Guh, Guh, Girl.” It’s lovely and we are dead impressed. We have encouraged him of course but never pressured him into any of this, it’s all him. He just loves to learn, which is fab! 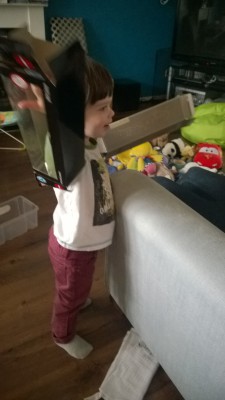 His imagination is really taking off lately too and it is lovely to see. He got given a car and caravan as a present when Little Miss was born, and he loves it, but he amazed us by then putting the box on is his arm and stomping round the living room saying (in his best robot voice lol) I am a robot! hehe We found him one of Daddy’s whisky boxes for his other arm and adores pretending to be a robot.

He also likes pretending to be a dinosaur and stomps around the living room roaring! He is also a bit obsessed with pretending things are rockets and flying them around “space.” This started because Daddy one day decided a jar of peanut butter was going to blast into space, and well, now pretty much anything can become a rocket and fly around in space :).  He also had a very lovely Teddy bear tea party with Daddy a few days ago and he got really into it, dishing out food and drink to all his cuddly friends. 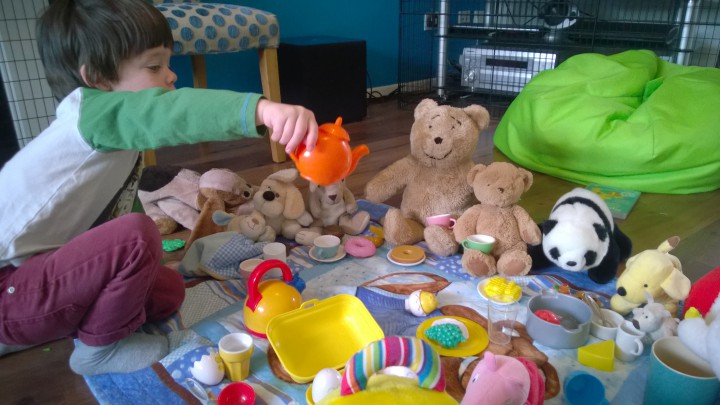 You can tell who his faves are though as one particular bunny got all the best treats lol! 🙂 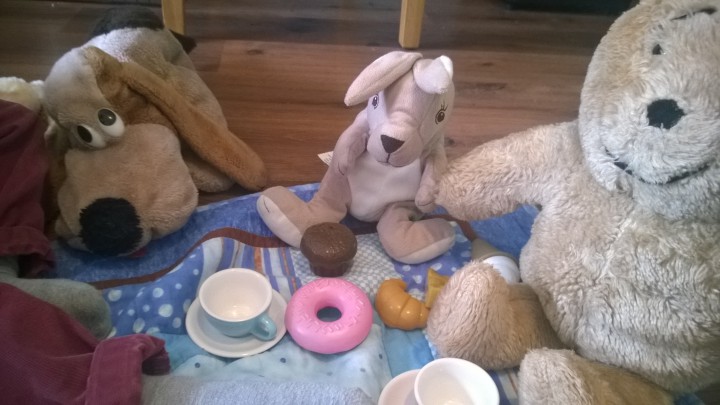 For a while Monkey really wans;t interested in drawing at all, but lately he has been enjoying it a lot more. He likes to colour things in (obviously it’s a bit hit and miss) and whenever we get a big piece of paper out on the floor he loves drawing the road with me – though I then get instructions about what to draw next (a robot, a castle, a bell etc, lol). Then if Daddy or I ever draw a smily face, he always insists on adding the hair to the face and naming it either Mummy or Daddy lol! 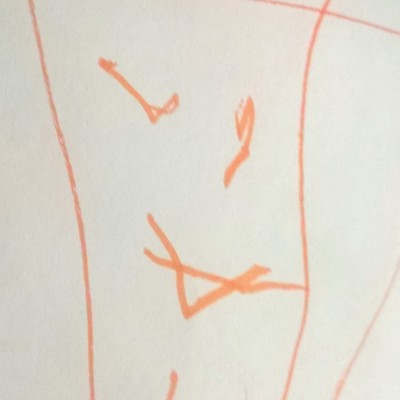 Then in a bit of a step forward, I was pleased this morning when he drew two eyes and a mouth and called it a smily face. It’s the first time he has ever drawn a face! Hooray! 🙂

These are some of the best recent developments but there is of course a few things we are less keen on!

I have read so many times how common it is for an older sibling to regress a little when a new baby arrives. It is one of the many reasons Monkey isn’t potty trained yet. So I guess it is pretty inevitable that Monkey has regressed a little bit. On the whole he is doing amazingly well with all the changes, but he has definitely been affected by her arrival.

He is much more clingy and wants cuddles and particularly to be carried a lot more. Obviously I can’t carry him because of my C-Section so he insists on Daddy carrying him a lot, which is something he hasn’t done for ages. We did indulge this a little to start with but have been a bit firmer lately and he is doing a bit better now. He is doing a lot of Ga Ga Ga ing too, which is in stark contrast to all the chatting he is doing as he is expanding his vocabulary.

He also got pretty possesive of his Grandparents and was not impressed by Granny giving the baby a cuddle, in fact he shouted and insisted “Mummy take baby!!” He did do a little better the next time we saw them though and as long as he still gets lots attention first, he is generally managing ok with Little Miss getting some attention too.

He currently hates getting dressed in the morning though to be fair this had started a little before his sister was born. He just does not want to get out of his pyjamas at all and generally a bit of a tug of war ensues, with a bit of a tantrum and tears. Sometimes I can catch him off guard or make it fun but nothing is guaranteed to work!

I’m sure most parents would agree that having a child really makes you are of what you say. For example, we never realised how much we were using the word oi. We also never realised what a not very nice word it really is. That is until our 2 year old started saying it. To us and to other children. “Oi! That’s my toy!” and “Oi Oi Oi” Oops! I know it could have been worse but we are still trying to move on to saying “hey” instead of “Oi.”

So in many ways Monkey is doing really well, and in others, well he is being a typical toddler 🙂 We seem to say at every age that we are loving this age and the same can be said right now. He is growing up a lot, his concentration and attention span is improving so much and he really likes to help with things. Yes he has his moments but what child (Or adult) doesn’t? He is a lot of fun and we love him to pieces.