I have seen versions of this before, and actually tried once before a long time ago, though Monkey was too young to really appreciate it at the time. I had forgotten about it entirely until I read this post by Carie at Space for the Butterflies. Seeing how much her girls enjoyed it made me keen to give it another go.

So, one slightly grey miserable day with nothing else planned and realising we were in need of some rainy day play, I decided to have another try and see if Monkey liked it. 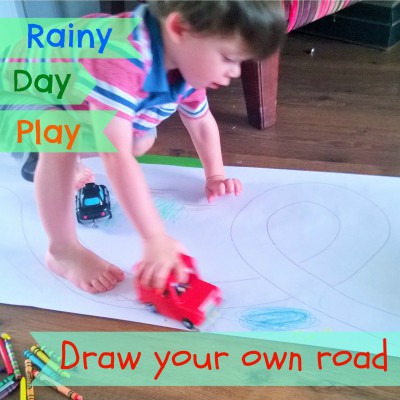 A big sheet of paper, we used an easel roll and rolled out a long bit of paper, though you could possibly tape sheets together.

A Toddler with a bit of imagination 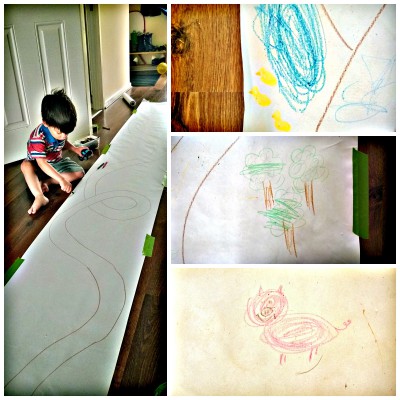 Monkey was dead excited as soon as I started rolling out the sheet of paper, and I think he wondered what on earth I was up to! Once it was rolled out I got the crayons and started drawing a long windy road. Seeing the crayons and paper Monkey wanted to join in too so of course  I let him.

He drew a lovely blue squiggle that I decided he surely intended to be a pond (?) so I drew some lovely ducks by it. I drew some trees which he helped me to colour in and I was then presented with the pink crayon and requested to draw a pig with it.

He also added some other wonderful artistic touches… I have no idea if they are supposed to be anything but this is his playtime more than mine so I let it go ;).

I gave him his tractor and bus toys too and he spent ages playing with them all, wheeling them up and down the road. His imagination really is coming on leaps and bounds as he needed very little prompting from me now, and I imagine that as he gets older this kind of playtime will become even more independent, which is very good news!

We focussed on ideas that I knew he would love – his post van and his bus, but you could theme it anyway that interests your child, and use what toys they have. You could draw castles and dragons for little princesses, make it more “sea” themed for tiny pirates or draw a burning building for  Fireman Sam fans! the possibilities are as endless as your (or your child’s) imagination. 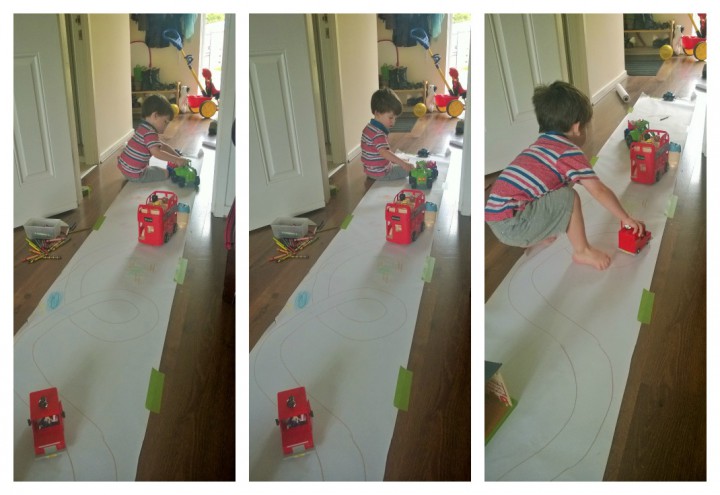 It was a really lovely little playtime with little effort involved really! I left the road down and he was excited to see it after his nap, but being in the hallway it soon got a bit trampled and torn so had to come up. It will definitely be repeated though especially as the weather gets golder and wetter.