Ages and ages ago the lovely Iona at Redpeffer tagged me in a Nostalgia Toys Meme, and I immediately started thinking what to write. But with one thing and another I never actually wrote it! Rubbish! But, here it is, better late than never, right?

We (and Monkey in particular) are really lucky in that our parents have kept some of the toys that we had as kids!

Hubby’s parents in particular have kept LOADS and Monkey adores going round to their house to play with all of the toys! They kept loads of brio and duplo (and apparently there is a box full of lego in the loft too) and cars, and just wow. There’s a farm Granddad made for hubby and his brothers, and just loads of stuff. Shows how long toys can last! 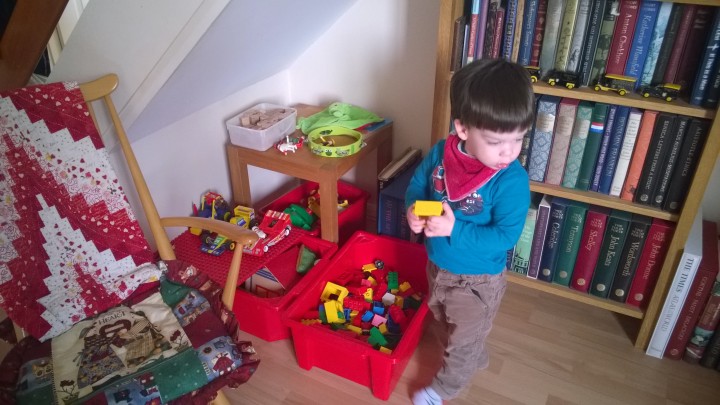 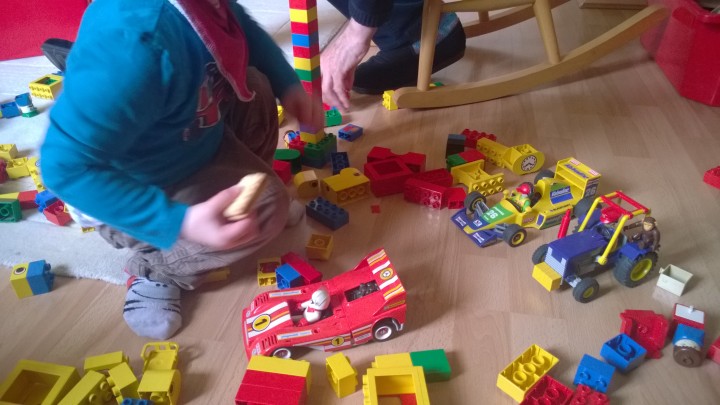 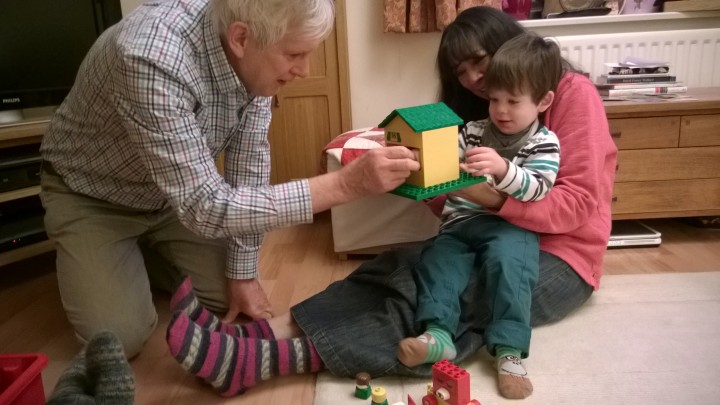 A few weeks ago they got a whole bunch of cars out of the loft and hubby and his brothers were loving getting them all out and reminiscing! 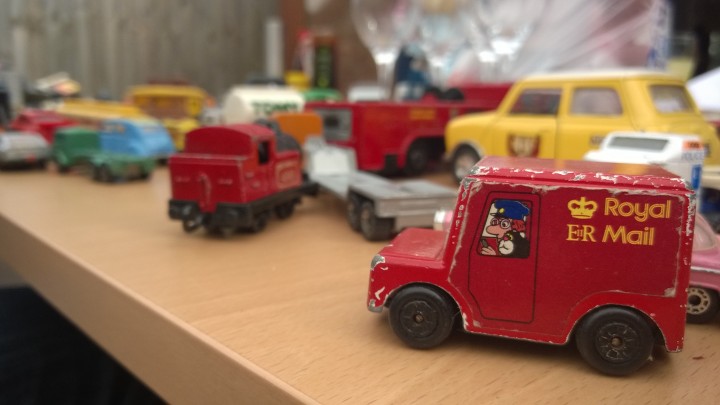 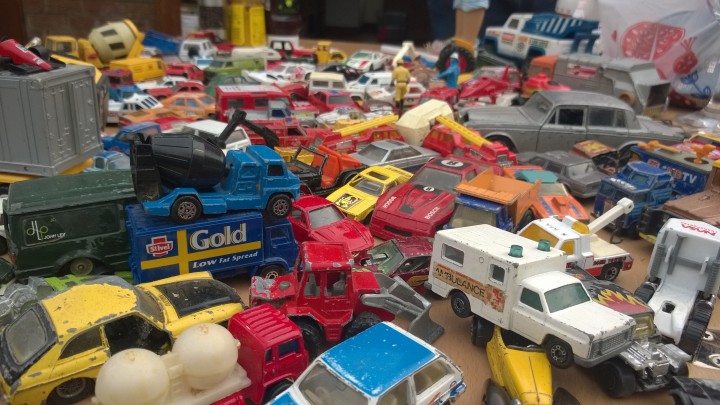 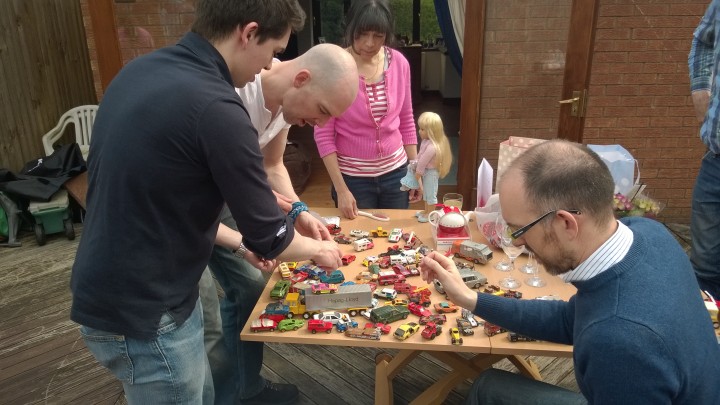 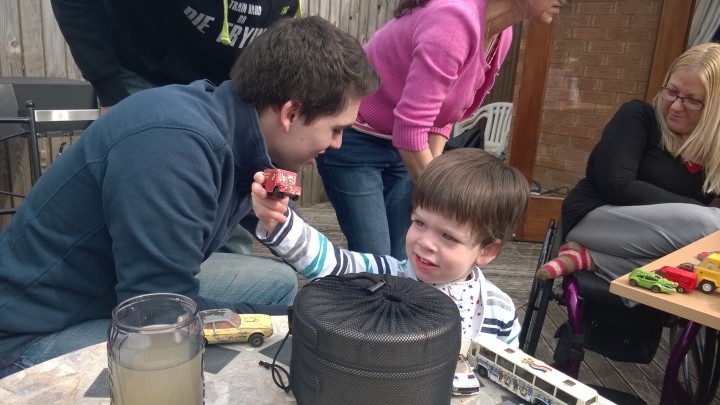 Monkey was so happy with them all too, particularly when he found a mini postman pat van! He adores that little thing! We split the cars up between our house and his uncles houses so there is always cars to play with! Having two brothers I remember many happy hours spent playing with cars, building elaborate race tracks and slopes for them out of sofa cushions and I am sure we will be creating many more with Monkey over the years!

My mum didn’t keep nearly as much as with moving house a few times lofts were cleared out, but she has kept some fab toys. We have some blocks that my uncle made for me when I was a tot – my auntie made the bag and it has a lovely C on it hehe. I don’t remember playing with them particularly but they have lasted so well! Monkey loves them, particularly knocking over Grandpop’s towers! 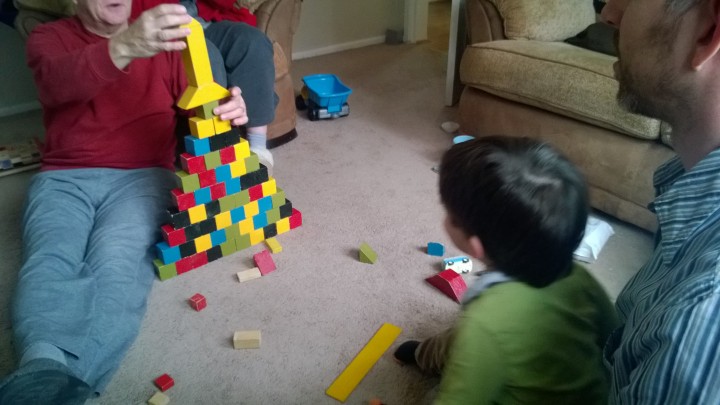 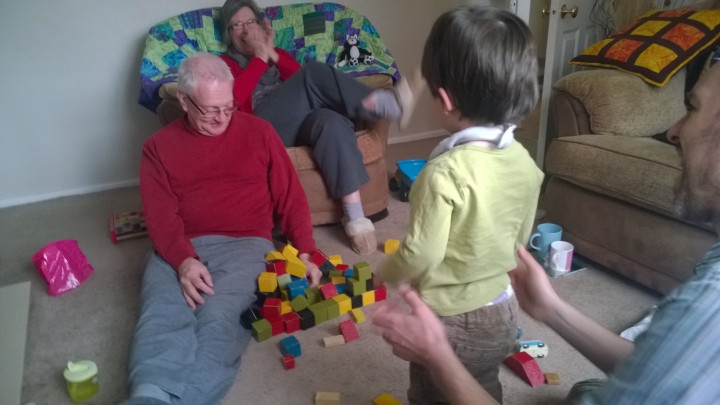 We also have a fab dolls house that again my uncle made and that Monkey adores. It brings back so many memories for me as some of the wallpaper was leftover scraps from my Grandparents’ house! Some of the furniture hasn’t lasted so well, but it is so lovely and it is really sweet to see Monkey playing with it too! 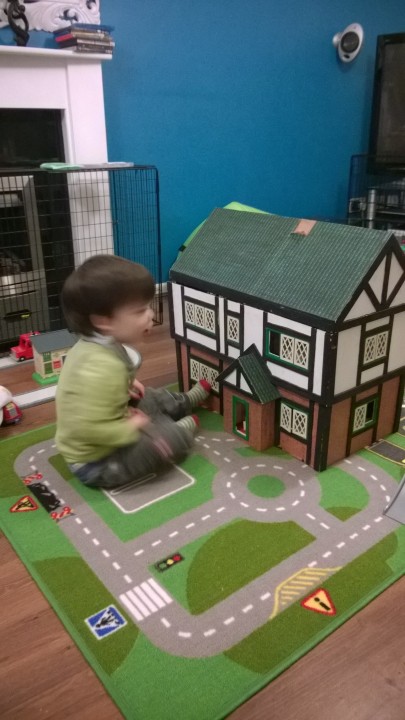 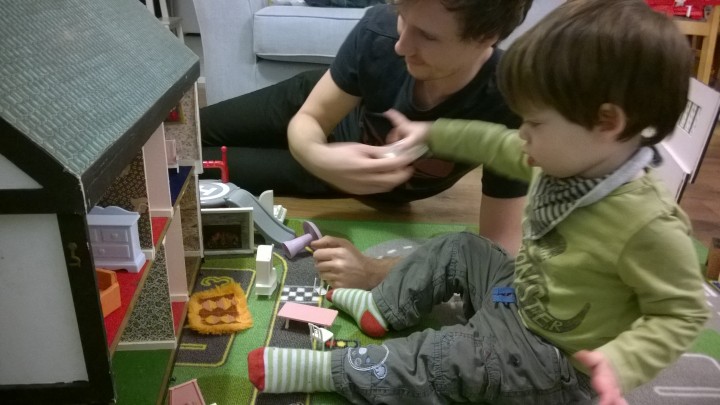 We’ve recently bought monkey a play house for the garden, second hand off ebay, and it reminded me of the houses my dad used to make for us. He was a cardboard box salesman (yep slightly random) so our garage was always FULL of cardboard. Which was great for making all sorts of things, and obviously as kids we loved it. The cardboard wendy houses in particular were great. He made this one when my older bro and I were little… 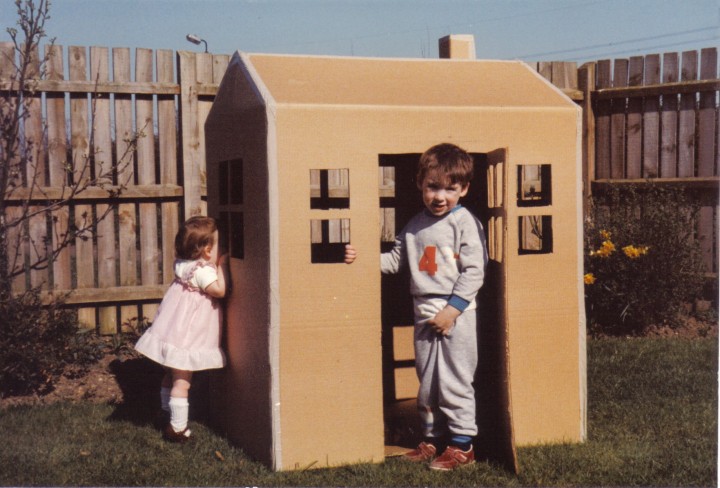 and then it got a whole lot more elaborate when our little bro had his made! I think his may even have had some carpet in it!! Lol! My mum worked for Woolwich at the time, hence the flag! 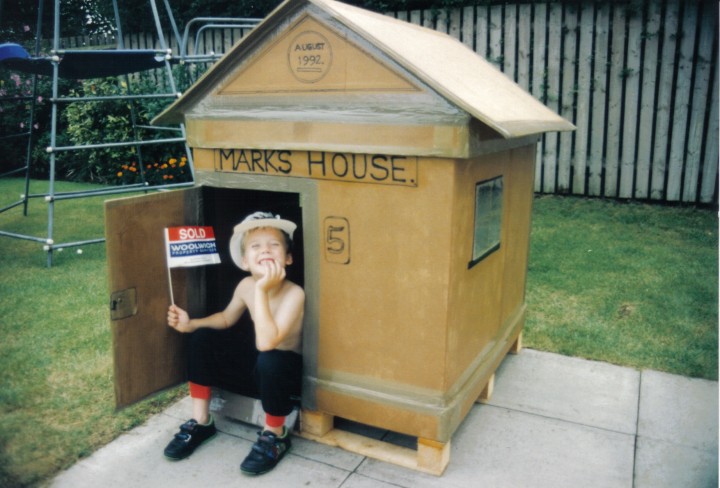 It’s lovely to think that even though technology has come on so much since we were kids, and with so many toys doing all these amazing things, sometimes, the simple toys are the best. You don’t have to go crazy or spend loads of money on a toy for a kid to be happy.

So there we have it, I have finally written this post! I though it was perfect timing to link up with Iona and Jocelyn for The Theme Game with this week’s theme of Childhood! Sorry it’s so late Iona!

I’m not going to tag anyone but if why not join in ? What were your favourite toys as a kid? Have you or your parents kept any of your old toys that your kids now play with?