The question of how many children to have is such a personal one and there are so so many factors involved in reaching an answer. It’s a question that we are considering a lot at the moment. There are so so so many sensible reasons why 2 children feels perfect and why we feel we are stopping now …. but there are still emotional factors that make us question whether this is the right decision. On the one hand the thought of having another baby actually gave me a panic attack a few weeks ago… but finding out someone I know is having a third child made me a bit troubled, like that is what I should want? Is there something wrong with me for not wanting that?

Both hubs and I are the middle child of 3 so for both of us a family of 5 is the norm and I think that is one of the biggest things that challenges us. We both adore our respective younger brothers and it sounds very very daft to say it out loud but somehow dismissing the idea of us having a 3rd child feels almost disloyal to them. Like saying our families would have been better with just 2 children. Which is absolutely not the case! 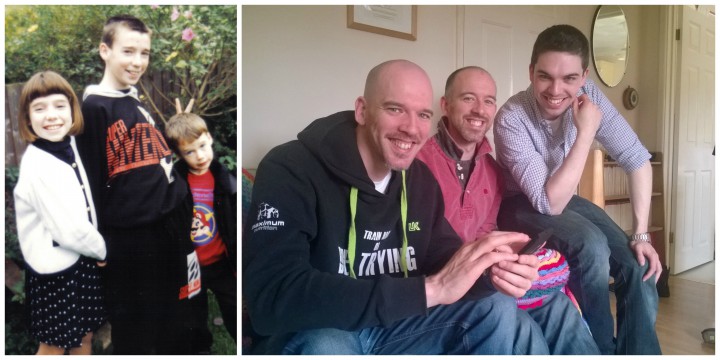 My brothers and I, and hubs (centre) with his brothers

On the flipside, growing up as one of 3 we both are all too aware of the practical challenges having a family of 5 brings. Bedrooms, cars, holidays, restaurants, finances…. all have additional challenges with a family of 5 or more. Those aren’t the reasons we want to stop at two though. If they were, and it was a question of head vs heart, it make it much easier as heart would definitely win over practical considerations.

The trouble is that in our hearts we do believe that 2 is right for us. So while in an ideal world we would love 3 or even 4 children… there are too many reasons why in reality that just may not be the right thing to do. Each reason on it’s own may not be enough to say a definitive no, but they add up to be fairly conclusive.

So what are they? 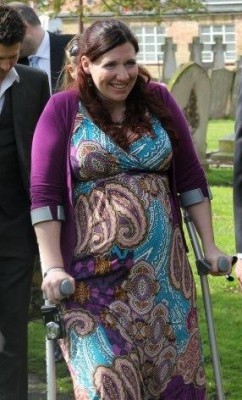 I can’t even believe this was me, I look awful and was in so much pain

I don’t enjoy being pregnant. Yes it is magical feeling the kicks and knowing life is growing inside of you. But the tiredness, exhaustion, sickness, and the fact that your body is no longer your own just makes it difficult to enjoy, for me.

Pregnancy for me is made much worse by SPD or PGP whatever they call it now basically hideous pain in my pelvis and lower back. With Monkey I ended up on crutches as I could barely walk and with LM I avoided crutches thanks to hours of extremely painful physio. Infinitely preferable but not exactly enjoyable! I think that is a big part of not wanting to be pregnant again as I felt so limited with what I was able to do with Monkey and 9 mths is a long time in his and LM’s little lives for me to be unable to run and play like I want to.

Because of my bicornuate uterus I have so far had 2 breech babies unable to turn and have therefore been unable to have a natural birth. There is a chance that my uterus will have stretched enough for a baby to turn but that is only a slim chance and I have to be realistic. The likelihood is that if we had another child I would have to have another cesarean. And honestly I don’t want to have surgery again. The pain post birth can be agonising and it puts me out of action after the birth. After feeling out of action during pregnancy because of my pelvis being out of action even longer is very hard. It also makes me reliant on other people more and I am not very good at that!

I don’t enjoy the newborn baby days. I just don’t. Probably down to the fact that both of our little ones have struggled with colic and LM had the addition of reflux. Watching your baby scream in pain for hours at a time (generally in the middle of the night) is hideous. The endless self doubt and questioning yourself trying to work out what to do to help them, while also being exhausted and trying to make life as happy and normal for your other child/ren. .. I just can’t do it again, I can’t. Good friends of ours have a gorgeous little newborn and he has really struggled with reflux and by trying to help and give them some advice we have been reliving those days a little. Honestly the thought of it made me seriously panicky and one night I made Hubs promise that we wouldn’t have to go through it again. 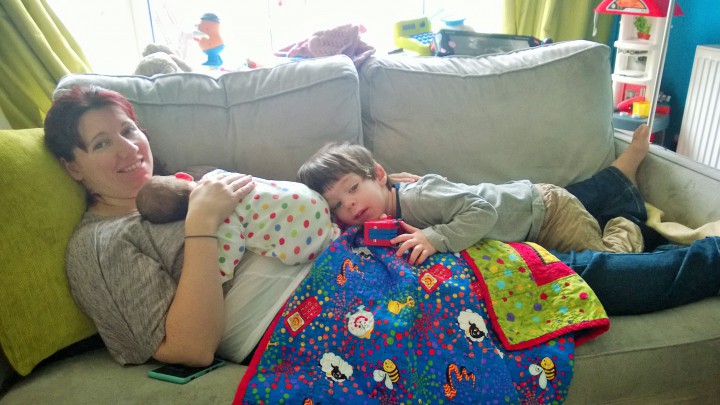 With the best will in the world I have found that friendships suffer when a new baby comes. You can’t be everything to everyone and when you are so tired and trying so hard to be the best Mummy you can be… sometimes friendships suffer as a result. And I love my friends and don’t want to feel disconnected from them again.

Friendships aren’t the only relationships that can suffer. Having a baby seriously tests relationships with your partner too. Sex after babies is an interesting topic and I am not going to go into too much detail as I know my mum and brother read this sometimes (hi!).

For some people pregnancy can make them feel sexier than normal or at least no different… but for me it has the opposite effect . It must be something to do with hormones but it is like that part of me entirely switches off when I am pregnant and doesn’t come back on for a long time afterwards. I just do not want to know, at all. Poor hubs he is very understanding but sex is a seriously important part of a relationship and without it you are more like friends or brother and sister. I have to make a seriously conscious effort to try and switch that part of me back on and it takes a long time to do so. I don’t think either of us like the thought of losing that aspect of our relationship for so long again.

I have postnatal depression. My antidepressants help massively day today but it is still there. I am reminded of this every month when I get hit by PMT, it is far worse than it ever used to be and I can be vile. It goes to show how much of my depression is related to my hormones I think. I know it could be a lot worse but also I worry what having another child would do to my mental state as it is already fragile. Like I say I panic at the thought of a third baby and I just don’t know how I would cope with the reality of one. 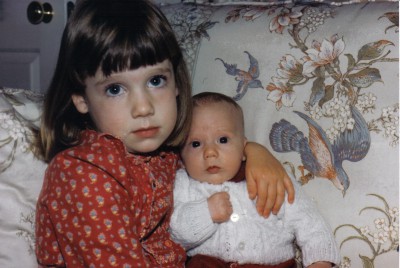 Don’t I look soooo happy to be a big sister??

We see a happy little unit of 4 and I can’t help wondering how a 5th member of our family would change the dynamics. Monkey is the big brother and LM the little sister… they have their roles and sibling rivalry already. How would it be for LM to be a big sister too all of a sudden? I was 4 when my little brother was born and it is embarrassing to admit it now but at age 4 I hated him. I had gone from being the baby of the family to having an adorable baby brother who was constantly cooed over instead of me. I don’t think that did me any harm but at the time I hated him and was horrible to him for a long time. I even packed his bags when he was a few years old, and told him to run away as no one wanted him. Harsh eh? Thank goodness he only went to the end of the road (we were the first house) as he wasn’t allowed further.

We are really close now and love each other to pieces but for years when we were children there was a lot of animosity (my older brother and I have always got on well). How would our childrens’ dynamics be with an additional personality? It’s funny but when we do imagine life with a 3rd we always imagine our third child being a boy… probably because we both have younger brothers… but what if we had another girl? That’s a whole other different dynamic to have sisters. .. neither one of us knows anything about! It’s scary but by not having a third are we denying them the chance? 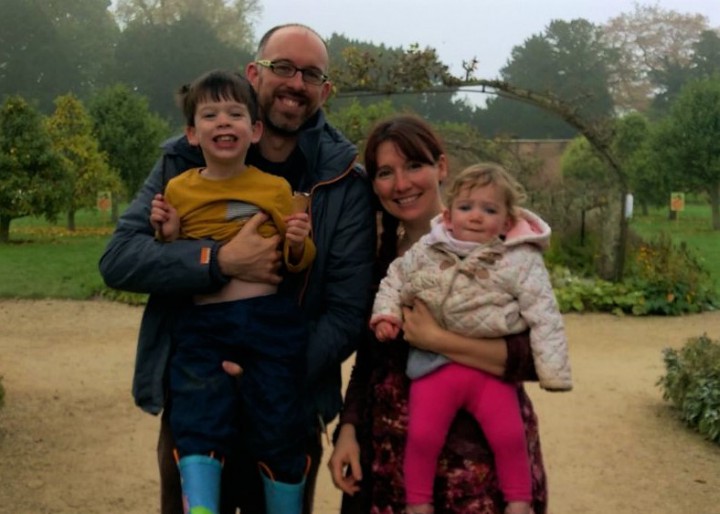 Our happy family of four

As with anything parenting related the weight of responsibility is huge. The decisions we make now affect the people our children will become. Would having another sibling make them stronger, or not? And what of the potential life that we are choosing not to bring into the world? Who would they be? What would they have the potential to become? The trouble with that argument though is where does it end. So while I love the idea of more children and can live in a fantasy world about the wonderful things having another child would bring to our lives… I have to remember the realities and the reasons why it would be so hard. And why we are choosing not to go down that road again and are stopping at two.

As ever I think I am probably over-thinking it all and our children will grow up perfectly happy without another sibling… Many families of four are perfectly happy and I do think I am so conflicted as I grew up as a five.  I am so so grateful for the wonderful happy healthy children we have and I guess I don’t want to mess that up. Have you made a decision on how many children? How did you decide?