“I Don’t Know” is Monkey’s latest favourite phrase, and to all of his family, it is the most wonderful sound in the world. He is a fairly late talker, although at not yet 2 it’s not like he is massively delayed, but compared to some of friends’ children who have been speaking since before they were even 1, it has felt like a big delay.

We’ve also worried that it was our fault in some way. We have read books to him since he was tiny, spoken to him about everything, sung songs every day, taken him to groups, done everything we could, and yet we never even had so much as a ‘mama’ or ‘dada.’ When I heard about health visitors praising the parents when a toddler has an excellent vocabulary, I panicked a little inside that in contrast then there must be something we weren’t doing right, fro him not to be saying any actual words.

I was consoled by the fact that he clearly understood so much of what we were saying, and many people said that it may be because he was such an early walker. His speech did gradually change and improve and I stopped worrying so much as I could tell that we were nearly there, though still didn’t know how long that would take.

Then a couple of months ago we were rewarded with his first word “go” and loved it. Since then he has added more words to his list, though not tonnes, but all random really. He still doesn’t really say mummy or daddy in any way shape or form, but he says go, sings row row row (for row, row the boat), says shoo to birds and sheep (learnt that one of the TV I think!) and says a few other words too occasionally, though not as frequently.

Not too long ago he started saying “oh dear” which we thought was lovely and he has now mastered the word “no” whereas he previously just shook his head. We are getting there with yes but it is a bit on and off. Then one day last week I was explaining to Monkey that we were going to collect his friend and that she was going to come in the car with us, as I didn’t want him to get upset by the unusual occurrence. He was looking at me very confused so I asked him “do you understand?” I don’t know why I asked, I wasn’t expecting a response but I always try and talk to him as if he is going to respond. Anyway, he just said three lovely words ” I don’t know.” Just once, but so clear, and my heart melted. He said it loads that day and melted Daddy’s heart too when he come home.

I think it is so special because we have been waiting so long for him to talk, and I guess that because it is more than one word, it really feels like you’re having a conversation, which obviously has never happened until this point! I don’t know whether it feels more magical to us because we’ve waited so long for it, or if we would have been just as soppy about it had he spoken earlier!

Over this weekend we have seen numerous members of our family who have all been treated to the same heart melting sound. There have been tears from a couple of his grandparents, and obvious pride from all his other family members to hear it. 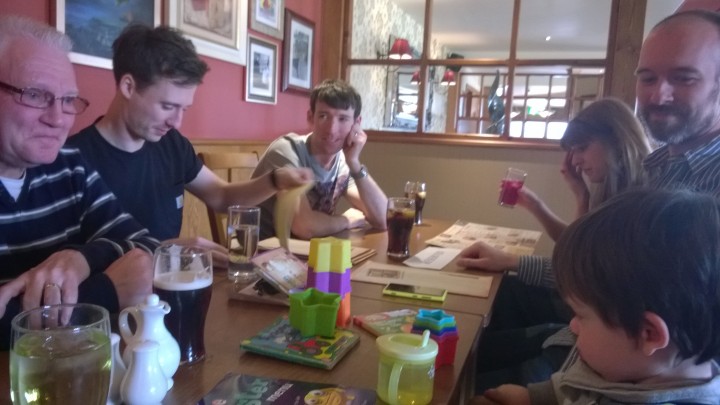 I’ve tried to catch it on video a couple of times, and he does say it here, but well, it doesn’t sound quite as good as when he says it more normally. I suppose he isn’t a performing seal though after all! I actually love his tone the last time daddy asks him in this clip, it’s like “I’ve already told you I don’t know, stop asking daddy!”