Monkey seems to be at an age where he is learning so much- and just soaking things up like a sponge so I thought it was a good time to write another Mini Milestones post to write it all down somewhere. I also feel that a fitting word for my word of the week, is Learning.

This is the biggy at the moment really. His speech is, all of a sudden, coming on leaps and bounds. As a slightly later talker I have worried in the past and been frequently reassured that one day it will just click and there’ll be no stopping him. I wanted desperately to believe this but there was always a seed of worry and doubt at the back of my mind that it wouldn’t happen that way. But, well, everyone was right! Something has clicked in his brain and the words are flying out of his mouth.

I wrote this week about his love of numbers and he is constantly counting at the moment, but it doesn’t stop there. For the first time in his life we are able to have rudimentary conversations – and I don’t mean conversations where the answer is just yes or no! He now says ‘ok’ a lot (I think I must say it a lot) but he is also developing little sentences. He now says bye bye and byee rather than just waving, and even says “see soo” for see you soon! He comes and says things like “dadda go way” and he was very cute (and cheeky) at Nanny’s house today. He got a bit of a treat of  chocolate bar for his pudding, and a little bit later, went and stood very smartly in front of Nanny and said “mo …chocat” (or something like that, he is really trying bless him!). Nanny was so impressed with being able to understand him that she repeated “more chocolate!” and he nodded and said “okay” haha though we then had to explain to him there was no more chocolate. We need to work on the word please next I think!

He is also getting a lot better with names and has been talking about his uncles Paul and Mark a lot this week after we saw them on Sunday. He just keeps repeating their names over and over Po, Maa and I have to tell him they are at work or when we are next seeing them! He says Nanny and Granny with ease, Granddad is still more like dada and he says Pops for his Grandpops. We are hoping to see his other uncles and aunts at the weekend so we will see how well he remembers their names! 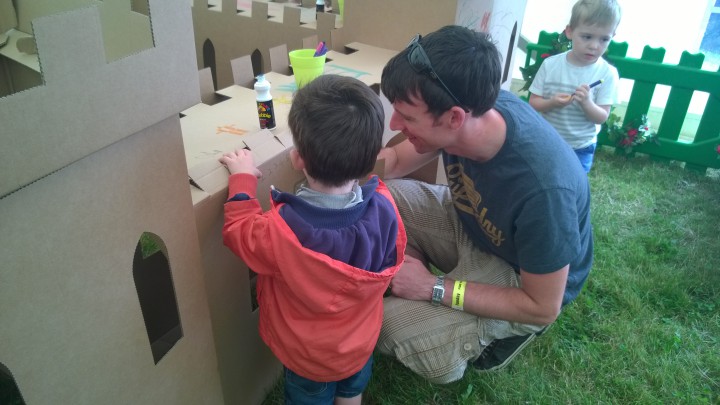 With his Uncle ‘Po’ at the weekend

His knowledge of colours is really coming on and Black, White, Purple and Green seem to be the ones he knows the best for some reason! It’s funny though that now he can talk, everything seems to take on new meaning with regards to learning. We did some sensory play with ice painting today (more to come on that next week but you can read an old post about it here) and when I was describing how it was wet and cold, he was actually repeating this back to me “Weh, coh” rather than me just feeling like I am talking to myself about it! If you can’t tell, I am absolutely loving his language development and all that comes with it!

We’ve also suddenly noticed that his memory is really improving. We do something or go somewhere that we haven’t done for a long while, and you can see how much more he remembers it. This can be both good and bad as if he didn’t like something it can be hard to persuade him to try again, but it is definitely good in terms of his relationships with relatives he doesn’t see quite so often as they don’t always have to start from square 1 with him! Phew!

No really huge changes physically in the last couple of months, he still can’t jump! Oh, actually he is getting much better at walking up the stairs while just holding one hand, his balance is very much improving. He is doing really well at tumbletots and following some instructions really well. His classes are finished over the summer now which is a shame but I am sure we will keep busy!

One thing we have been learning this week is how to hold scissors! Only the plastic bladeless ones for his play-doh set (which we play with pretty much daily – yawn!) and this week he has started to understand how to hold them, and with a bit of help he even managed to cut up a play-doh sausage this week, which I was dead impressed with! 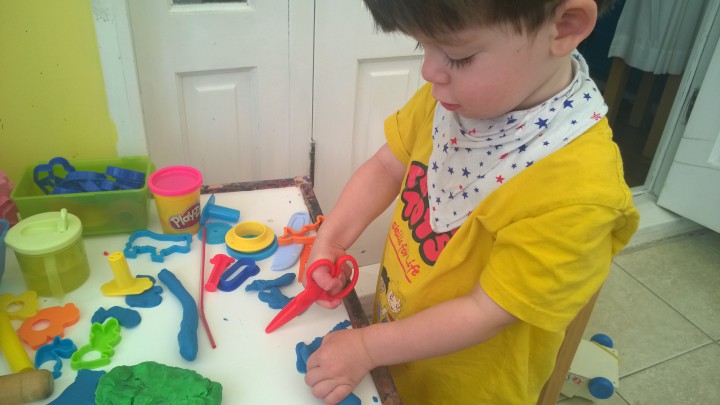 The last couple of weeks has seen huge developments in this area. I have written before about how an incident of being knocked over by an older child really threw his confidence. It’s incredible really as that was all the way back in April, but it has affected him until very recently with him hating other children coming up behind him or being too close to him. (See what I mean about a longer memory?!) I am very glad to say though that he does seem to have finally, 3 months on, got over this fear. He is no longer constantly checking behind him as he climbs up play areas (or throwing himself off if he sees another child). And all round he is just a lot braver.

We popped in to his Daddy’s office one day last week (as he forgot his lunch, silly Daddy) and whereas he is normally clinging to me or Daddy, this time he was off and was not shy around any of his colleagues at all. In fact he even went and grabbed Daddy’s Business Partner’s hand and took him off to the meeting room to draw on the whiteboard. Leaving both hubby and I in a different room – a real first!! We were dead impressed with that from our little shy boy!

Likewise at my mum’s today, he took Nanny off for a run around the garden and to go upstairs and get some toys without even looking where Mummy was, which over the last few months has been a really rare occurrence. I am hugely pleased, and relieved with this development as we were at this stage before but after that one little knock he really regressed. Fingers crossed nothing knocks his confidence in the same way again! 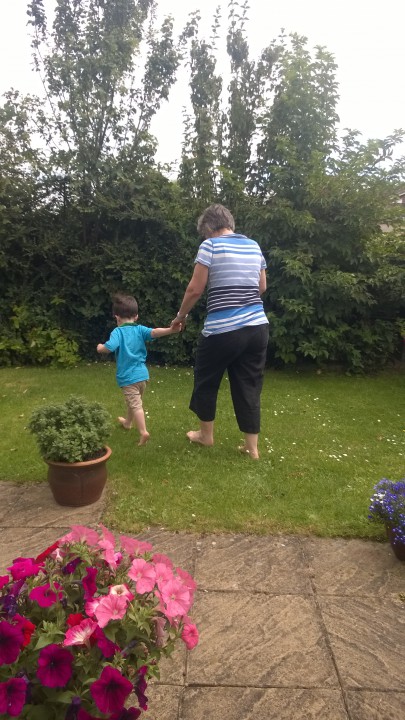 Along with his increased confidence, bravery and use of language, we have also seen an increase in some negative behaviours and defiance. This post is already getting huge though so there will be a post about that, and how we are dealing with it, in the next few days! Needless to say though we are having a steep learning curve in how to handle it!

Thankfully his behaviour is not all terrible and actually he is becoming very loving towards people, with lots of hand holding, cuddles and kisses going on to relatives, which is very sweet. He is also incredibly cheeky and is learning to be sarcastic! Where has he got that from? 😉 Sometimes when we ask him something he gives a very sarcastic “no” which actually means yes! So cheeky!

He is also learning how to wrap us round his little finger with cuteness (or at least he is trying very hard to) and when Daddy was giving him a very stern look the other day, Monkey was pulling out some of the cutest, cheekiest grins. Honestly thank goodness I was out of view as I was having a giggle. I didn’t think whatever he had done was worth the stern look anyway really and that cheekiness certainly doesn’t wash when he has been really naughty. So cheeky though and just another sign of how he is learning so much all of the time.

So there we have it, a little glimpse at how fast our little Monkey is growing up all of a sudden and learning so much every day!